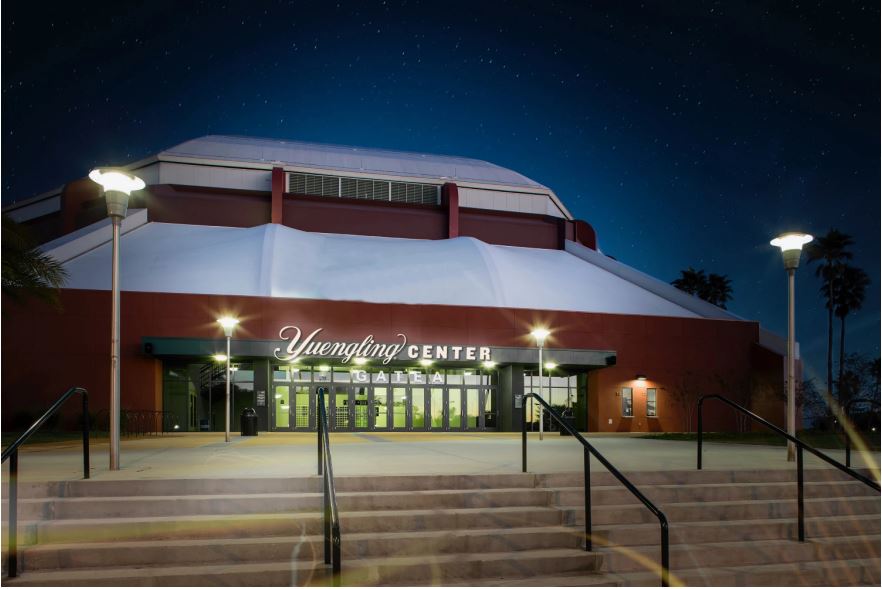 Tampa Bay Entertainment Properties, LLC (TBEP), acting as the agent for the University of South Florida (USF) and Sun Dome, Inc. (SDI) has reached an agreement with D.G. Yuengling & Son, Inc. for the naming rights of the Sun Dome. As of July 1, 2018, and for the 10-year term of the contract, the official name of the facility will be the Yuengling Center.

“Upon assuming management of the Sun Dome and the multimedia rights for USF Athletics weidentified the joint priority of selling naming rights to arena,” said Steve Griggs, Chief Executive  Officer for Tampa Bay Sports & Entertainment, parent company of TBEP. “And we pledged to the University that we would identify a reputable company with solid leadership and a strong local presence, one that USF would be proud to call a sponsor. D.G. Yuengling & Son, Inc., led by the Yuengling family, will prove to be a great partner for the University and its constituents.”

A full corporate and social responsibility platform inside the arena and throughout campus is being created as part of the partnership, one which will extend the University’s already deep outreach and education with its students, faculty, staff and alumni. Highlights will include the leveraging of kiosks at Gate A and D to the arena for messaging, designated ride share locations, and new initiatives with the USF student-body, funded by Yuengling.

“In Tampa Bay and across the country, the Yuengling family is known for its commitment to the community,” said USF System President Judy Genshaft. “We are grateful to have such a well known and reputable family associated with USF. We especially appreciate the efforts to promote corporate and social responsibility as part of this new affiliation. It is important and valued to have such support from partners like D.G. Yuengling & Son, Inc., and Tampa Bay Entertainment Properties.”

As is commonplace with any facility naming change, the “Yuengling Center” name will replace all “Sun Dome” references, in and on the facility, on campus and on all local signage. A Yuengling Center logo has been created, all digital and social domains will be changed and facility uniforms, including employee name tags will bear the Yuengling Center moniker.

In addition to the more typical sponsorship benefits guaranteed with the naming rights acquisition, Yuengling will also receive east and west-side field level signs and LED ribbon board branding in Raymond James Stadium for USF home football games, extensive assets for all men’s and women’s basketball games played in the arena along with signage at USF baseball and softball games. Several other elements are included in the partnership deal including tickets and hospitality for football, men’s and women’s basketball, baseball, softball and all events at the newly named Yuengling Center.

“Yuengling has been brewing beer in Tampa for nearly 20 years. We are very excited to extend our presence in the Tampa community to include the partnership with USF and the Yuengling Center,” said Jen Yuengling, 6th generation brewer, D.G. Yuengling & Son, Inc. “Beyond naming rights, we’ll continue to support the greater Tampa community and on the campus of USF with
the popular Handshake Internship Program, a scholarship for a veteran to attend USF’s Brewery Arts Program, and upcoming social responsibility initiatives. Yuengling Brewery is a family company, first and foremost, and we think this partnership is a great way to help further enhance the local community.”

The Yuengling brewery remains a mainstay in the Northern Tampa community, where it’s only a mile away from the USF campus. J.J. Taylor Distributing Florida, Inc., which distributes Yuengling products locally, will assume a leadership role in assuring all elements of the partnership agreement are executed, including social responsibility and community programming.

About Yuengling Center
The Yuengling Center (formerly USF Sun Dome) opened on the campus of the University of South Florida in November of 1980. The 55,000 square foot multipurpose facility, which includes a 10,500 seat arena, has seen over $43 million in renovations since 2000, including replacement of the original Teflon inflatable roof with a permanent structure, and numerous interior upgrades and improvements.

Tampa Bay  Bay Entertainment Properties, a subsidiary of Vinik Enterprises, LLC, took over management of the facility in July of 2017, and brought D.G. Yuengling and Son, Inc., on as entitlement partner in June of 2018. Primary tenants of the Yuengling Center include The University of South Florida Men’s and Women’s Basketball teams, and the USF Volleyball team.

About the University of South Florida
The University of South Florida, established in 1956 and located in Tampa, is a high-impact, global research university dedicated to student success. The USF System includes three, separately accredited institutions: USF; USF St. Petersburg; and USF Sarasota-Manatee. Serving more than 49,000 students, the USF System has an annual budget of $1.6 billion and an annual economic impact of $4.4 billion. USF ranks in the top 30 nationally for research expenditures among public universities, according to the National Science Foundation. In 2016, the Florida Legislature designated USF as “Emerging Preeminent,” placing USF in an elite category among the state’s 12 public universities. USF is a member of the American Athletic Conference.

About Tampa Bay Entertainment Properties, LLC
Tampa Bay Entertainment Properties, LLC was formed by Jeff Vinik in 2017 as a firm specializing in patnership sales, consulting, marketing and operations in the sports and entertainment industry with a focus on creating world class experiences. Vinik purchased the Tampa Bay Lightning and the leasehold rights to AMALIE Arena, in March 2010, transforming a moribund organization into one of the most highly regarded franchises in sports today; earning recognition as the number one organization in professional sports by ESPN in its 2016 Ultimate Sports Standings. Vinik is also a partner, with Cascade Investment, LLC, in Strategic Property Partners, which is redeveloping 53 acres of property in downtown Tampa into a $3 billion mixed-use development, bringing hotels, housing, retail, office space and the USF Morsani College of Medicine to the Channelside area.