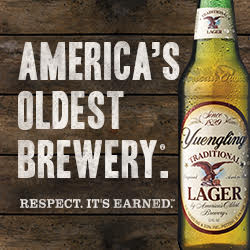 The “Respect. It’s Earned.” campaign takes Yuengling’s history and makes it tangible by showcasing elements of the brewery and its traditional brewing process that speak to its authenticity. Imagery of the nearly two-century-old hand-dug fermentation caves that were used for storage before refrigeration, the on-site brew house, and time-tested bottling line underscore the brewery’s legacy as America’s Oldest Brewery and its dedication to brewing quality beers.

The 360-degree “Respect. It’s Earned.” campaign, which will run throughout Yuengling’s 18-state footprint, includes TV, print and digital, as well as both on and off premise retail promotions. In 2016, Yuengling will nearly double its media spend behind this campaign.

“My family has been brewing beer for almost two hundred years, and we’ve been fortunate to have incredibly loyal fans during that time whose enthusiasm has helped our business succeed,” said Dick Yuengling, fifth generation president and owner. “We have a unique story to tell, and we decided that it’s time we told it more broadly. I’m proud of this campaign because it honors the legacy of our family owned and operated business while introducing Yuengling Traditional Lager to a new generation of beer drinkers.”

“Many beer drinkers don’t realize that Yuengling has been brewing beer longer than anyone else in America, which is an incredible achievement and a testament to our quality beers,” said Tyler Simpson, Director of Marketing. “This campaign highlights our 187 years of rich brewing heritage, culminating in our amazing Yuengling Traditional Lager. We are excited about how this work will help us connect with and build another generation of passionate Yuengling fans.”

Chris Reif, SVP creative & innovation at Allen & Gerritsen, noted, “Collaborating with the Yuengling team has been nothing short of awesome. It’s incredible to work with a company that has a rich history and a great product. The storytelling opportunities that exist with the brewery are endless, but we’re really excited to make the Yuengling Traditional Lager story in particular more widely known.