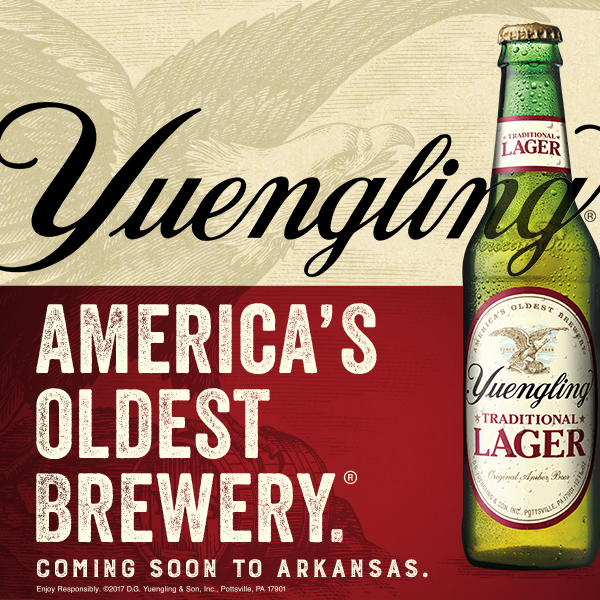 Pottsville, PA, December 7, 2017 – D.G. Yuengling & Son, Inc., America’s Oldest Brewery®, is pleased to announce that it is expanding the distribution of its highly sought after brands to Arkansas.

“We are proud to partner with Yuengling in Northwest Arkansas. For years, we have received requests from both our retail partners and consumers for the brand and we are excited to bring it to them in 2018!” said Heath Sutherlin, Premium Brands of NWA.

“We are thrilled to partner with Yuengling, America’s Oldest Brewery, to introduce their beers to our customers in Arkansas. Their passion and dedication to producing the highest quality beers is already well known. It’s an honor to be able to represent them in the communities we serve,” said Will Herrin, Vice President of Sales and Operations, AR, KS & LA Glazer’s Beer & Beverage.

The rollout in January will include Yuengling’s flagship beer, Yuengling Traditional Lager, as well as Light Lager and Black & Tan brands.

“Our consumers in Arkansas have been asking for our beer for many years,” said Dick Yuengling, Owner and President. “We’re pleased and eager about this expansion into the great state of Arkansas. This is a celebratory moment for America’s Oldest Brewery.”

Arkansas will become the twenty-first state in the brewery’s footprint. Yuengling rolled out distribution in Indiana, its twentieth state, in March 2017.