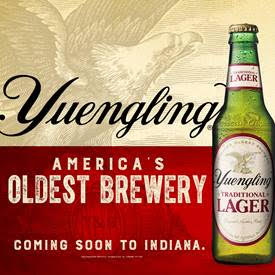 Pottsville, PA, January 12, 2017 – D.G. Yuengling & Son, Inc., America’s Oldest Brewery, is pleased to announce that it is expanding the distribution of its highly sought after brands to Indiana.

Three wholesalers have been assigned to distribute Yuengling products in the state. Yuengling welcomes into their network; Monarch Beverage, Indiana Beverage and Five Star Distributing.

“Some things are just worth the wait!” said John Xenos, Senior Vice President of Monarch Beverage. “We are proud to have been selected to represent the Yuengling Brewery brands when they are finally introduced in Indiana in 2017!” Bruce Leetz, Owner of Indiana Beverage, is also passionate about the brand’s expansion and stated, “our family has been in business in Indiana for five generations and to be able to partner with the America’s Oldest Brewery is both humbling and powerful.”

The rollout in March, will include Yuengling’s flagship beer, Yuengling Traditional Lager, as well as Light Lager and Black & Tan brands. Soon after, Yuengling will release its lineup of heritage and seasonal brands.

“Yuengling has a lot of exciting things happening in 2017 and this expansion into the great state of Indiana is the first of several announcements,” said Dick Yuengling, Owner and President.

Numerous additions and upgrades to Yuengling’s production capabilities facilitated this venture. Indiana will become the twentieth state in the brewery’s footprint.