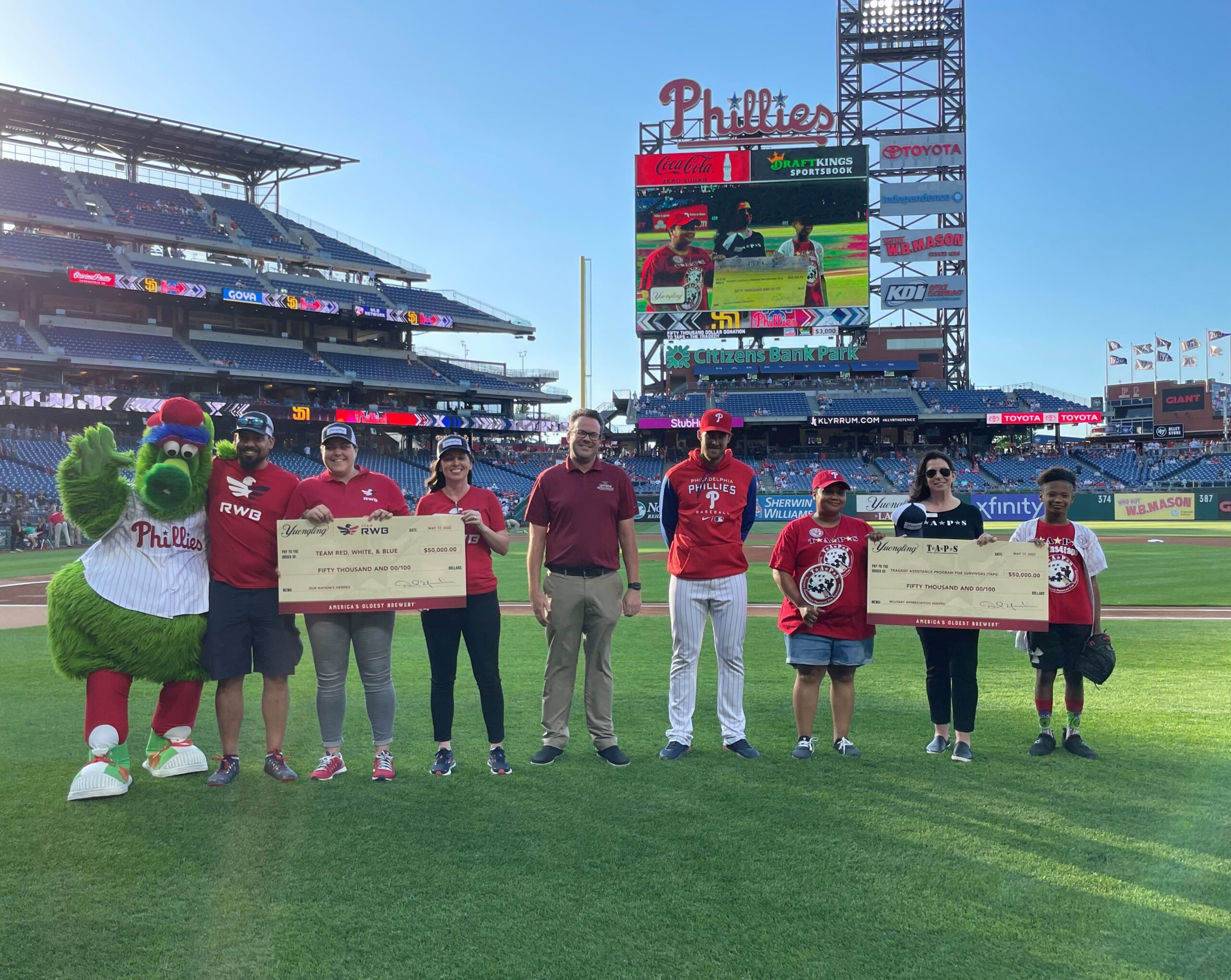 Yuengling has been a proud supporter of the brave and dedicated men and women who have made tremendous sacrifices to protect our country’s freedom, honor, and independence.

“Supporting the military and veteran communities has always been part of our DNA at Yuengling,” said 6th generation family member and Employee Engagement & Culture Manager for D.G. Yuengling & Son Inc., Debbie Yuengling. “We have been, and always will be, committed to giving back to the military and veteran communities, and enriching the lives of our nation’s heroes and their families.”

At a Philadelphia Phillies pre-game check presentation ceremony, Yuengling presented a $50,000 check to Team Red, White & Blue, which will be used to support the organization that is forging America’s leading health and wellness community.

“We are thankful for Yuengling’s continued support of Team RWB,” said Mike Erwin, Executive Director of Team RWB. “From including our Team RWB logo on the Yuengling Lager cans, to supporting our programs, Yuengling has been a true partner in every sense of the word. We are fired up that Aaron is supporting America’s veterans. He embodies the ways athletes can support others through their platforms, and are thankful for his commitment.”

Yuengling also presented a $50,000 check to TAPS, which will be used to further provide support for the families of America’s fallen military heroes.

“We are proud to have the support of America’s Oldest Brewery,” said Bonnie Carroll, Founder of TAPS. “Since TAPS’ inception in 1994, we have cared for more than 100,000 surviving family members through a national network of peer-based emotional support services, a 24/7 helpline and casework assistance for families. Yuengling and Aaron’s contributions will help us to continue providing care and support to the families who need them.”

In further support of our nation’s heroes, Philadelphia Phillies pitcher, and Yuengling brand ambassador  Aaron Nola, teamed up with Yuengling throughout the week to create some once-in-a-lifetime experiences for the military and veteran communities.

Kicking off the week, Nola visited the iconic Yuengling Brewery in Pottsville, Pa, where he spent the day touring the historic brewery, learning the brewing process, signing autographs for fans, and meeting veteran employees.

Then, at Citizens Bank Park, Nola hosted a private, pre-Phillies game party with Team RWB and TAPS military and veteran members in the Yuengling Party Pavilion. Serving as guest bartender for the event, he spent some quality time with the military and veterans hearing their inspirational stories, taking pictures, and enjoying some Yuengling Traditional Lagers with our nation’s heroes.

Lastly, at the Philadelphia Phillies pre-game check presentation ceremony, Nola announced that he is joining Yuengling’s efforts and will be donating $250 to Team Red, White and Blue for every strikeout this season, and $200 to TAPS for every Phillies win.

“Giving back to the military and veteran communities this Military Appreciation Month is just a small token of my gratitude for all of our past, present and future service men and women,” said Nola. “I know Yuengling has been a longtime supporter of a variety of military organizations, so when we teamed up back in 2019, I was excited to become more involved. This month has been amazing, and an honor getting to meet and support Yuengling’s fans, family, military and veteran communities this May.”

Over the past few years, Yuengling and Nola have worked together to raise more than $300,000 for a variety of charities including Team RWB and TAPS, and Nola helped spearhead Yuengling’s “Cheers PA” a virtual fundraiser where 100% of the proceeds went to help bartenders and waitstaff impacted by COVID-19.

Yuengling will continue to honor America’s veterans throughout the summer with the return of its limited-edition Yuengling Traditional Lager cans, emblazoned with a unique desert camouflage print and Team RWB logo. These special cans will be available across the brewery’s 23-state footprint in 12pk/12oz and 24pk/12oz cans and single-serve 24oz cans which are available for purchase at Yuengling fans’ favorite stores, restaurants and bars.

About the Philadelphia Phillies

The Philadelphia Phillies are a Major League Baseball team. They are the oldest continuous, one name, one city franchise in all of professional American sports, dating to 1883. The Phillies are a member of the Eastern Division of Major League Baseball’s National League. Since 2004, the team’s home has been Citizens Bank Park in the South Philadelphia section of the city. For more information, visit phillies.com.

About TAPS
The Tragedy Assistance Program for Survivors (TAPS) is the leading national non-profit organization providing compassionate care and survivor support services for the families of America’s fallen military heroes. TAPS provides peer-based emotional support, grief and trauma resources, grief seminars for adults, Good Grief Camps for children, case work assistance, connections to community-based care, and a 24/7 resource and information helpline for all who have been affected by a military death. Since 1994, TAPS has offered support to more than 100,000 survivors of fallen military. For more information, visit TAPS.org.

About Team Red, White and Blue
Team Red, White & Blue (Team RWB) is a nonprofit organization forging the nation’s leading health and wellness community. Founded in 2010, Team RWB offers veterans real-life and virtual opportunities to build a healthier lifestyle. Team RWB believes that a strong focus on mental and physical health impacts every aspect of life and is essential for veterans to unlock their full potential. For more information about Team RWB and its 200,000 members visit teamrwb.org.