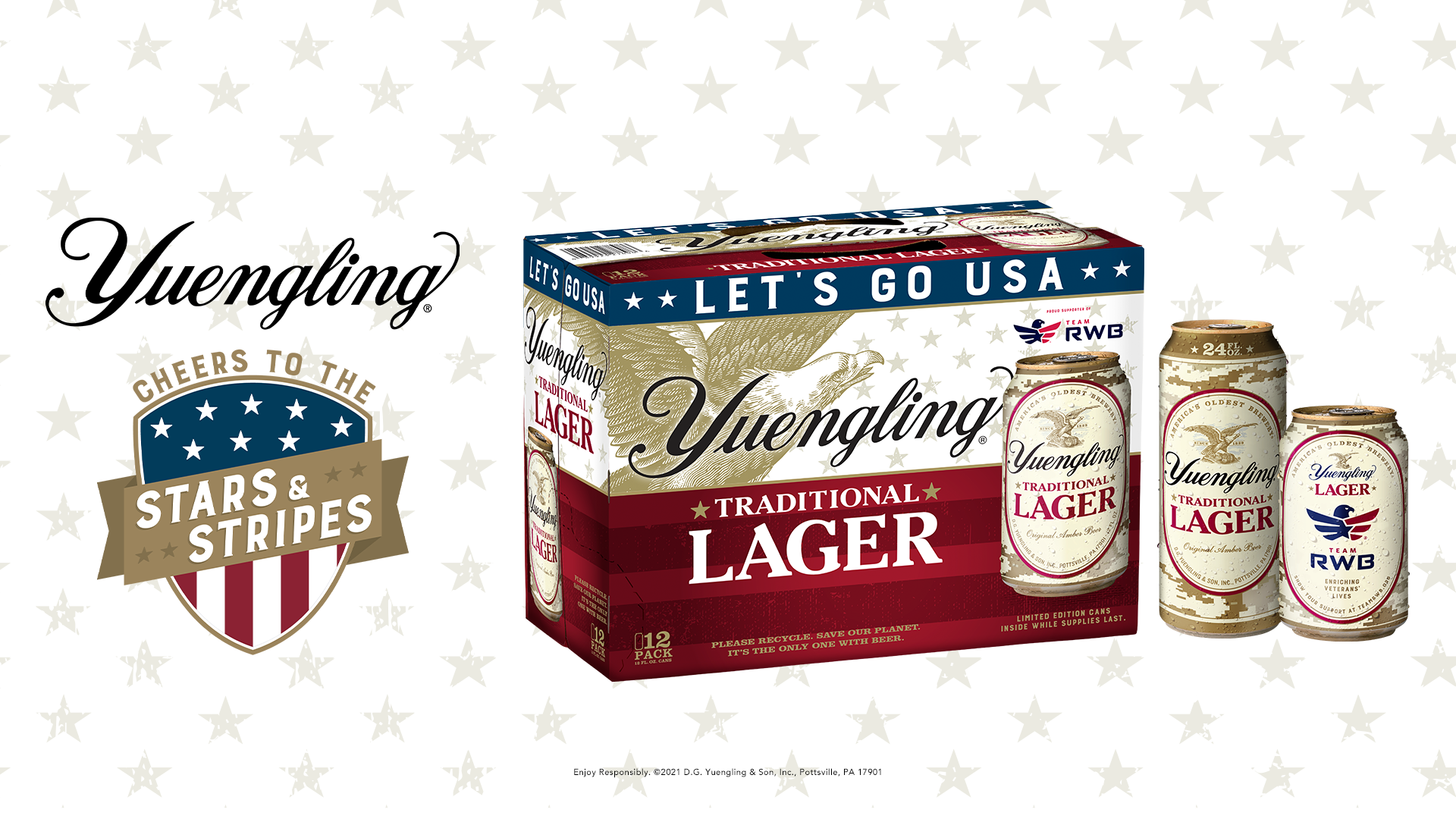 The Yuengling Stars & Stripes program is dedicated to supporting our nation’s veterans through Team RWB.  The new cans, emblazoned with a unique desert camouflage print and Team RWB logo, are part of a continued effort to pay tribute to the men and women who served our country.  Starting this month, these special Yuengling LAGER camo cans will be available for a limited time this summer across Yuengling’s 22-state footprint in 12-ounce 12-pack, 12-ounce 24-pack as well as 24-ounce cans. The camo cans will include a Snapchat code that will allow users to engage with the brewery’s iconic Yuengling Eagle and invites consumers to donate to Team RWB, a nonprofit forging America’s leading health and wellness community for veterans.

“As America’s Oldest Brewery, we are forever in awe of the brave and dedicated men and women who have made tremendous sacrifices to protect our country’s freedom, honor, and independence,” said Jennifer Yuengling, Vice President of Operations and 6th Generation Brewer at D.G. Yuengling & Son, Inc. “After working with Team RWB for several years, the launch of the Stars & Stripes program is a great way to grow our partnership with an organization that shares our same commitment to our nation’s military. Our limited-edition Lager cans are a part of our continued commitment to helping Team RWB build onto their invaluable resources and support services for America’s veterans.”

Yuengling has been supporting the U.S. military for many years. The Brewery has partnered with various military-centric organizations including Team RWB, Operation Gratitude and Tragedy Assistance Program for Survivors (TAPS) in support of their collective efforts for our nation’s heroes.

“We are extremely honored to receive the generous support of Yuengling via their Stars & Stripes program and new camo cans,” said Mike Erwin, Executive Director of Team RWB. “These donations will enable us to significantly expand our programs and impact the health and wellness of our nation’s veterans.”

Lee Brice, American country music singer and songwriter and Curb Records recording artist will also be involved in the Yuengling Stars & Stripes program by promoting donations to Team RWB through performances on behalf of the Yuengling brand, fan meet & greets, and chances to win tickets and other music giveaways.

“It’s been a challenging year for many military men and women and so I’m thrilled to join Yuengling in rolling out a limited-edition pack that will benefit Team RWB,” said Lee. “Supporting our troops and saluting them with an ice-cold LAGER seems like a natural fit. Thanks for all you do to protect us!”

About Lee Brice
When Curb Records recording artist, Lee Brice, isn’t selling out arenas, writing and recording songs, or building new brands like American Born whiskey, you’ll find the family man with his wife Sara, two young boys, and daughter. Meanwhile, with 2.4 billion on-demand streams, and over 3.3 billion spins on Pandora, Brice continues to enjoy massive success at country radio, digital streaming services, and on the road. He recently reached #1 at Country Radio with “One of Them Girls,” which follows his #1 with Carly Pearce on “I Hope You’re Happy Now,” and his #1 just prior to that, “Rumor,” which was nominated in the category Single of The Year at the 55th Annual ACM Awards. One of the most-played country artists of all time on Pandora, he is a member of the company’s “Billionaires Club,” becoming only the second country artist behind Keith Urban to receive the Pandora Billionaire plaque. Lee is also a GRAMMY nominee, a CMA and ACM award winner, and he’s taken eight radio singles to Number One. Lee’s new album, Hey World, is available now.